A Ringside Physician present at Tim Hague’s fatal boxing bout in 2017 admitted in court filings that Hague was assessed for “Depression and Suicidal Ideation” in the months prior to his death.

As previously discussed Hague, a former UFC fighter, died from brain trauma after a boxing bout on June 16, 2017 in Edmonton Alberta. He was clearly outmatched being knocked down 3 times in the first round with an arguable 4th knockdown that the referee deemed a slip.

In the second round, Hague was dropped for a fourth official time and allowed to continue. Shortly thereafter the final knockout blow landed. He died in the following days.

Hague had a history of recent brain trauma prior to the bout. He suffered a series of recent combative sports losses by KO and TKO.

Serious questions arose regarding the regulation of this bout and Hauge’s suitability to be licensed. In June of 2019 the Hague family named numerous parties in a wrongful death lawsuit including the City of Edmonton, the Edmonton Combative Sports Commission (the “ECSC”), Pat Reid who was the Executive Director of the ECSC at the time, David Aitken who allegedly was responsible for Reid’s hiring, Len Koivisto who was the referee for the bout along with two ringside physicians and the promoter of the event.

The ringside physicians were the latest to file their statement of defense. One Ringside Physician admitted that, in addition to being at the bout in question, he was also Hague’s “community family physician” and treated Hague in the months prior to his death.  The Court filing notes that “Mr. Hague was assessed for depression and suicidal ideation.“ A few paragraphs later the physician pleads that he “was not informed of, nor was he aware of any pre-existing medical condition that would preclude Mr. Hague from participating in the Match.“

Hague apparently was diagnosed with CTE in his autopsy, a brain disease linked to cumulative brain trauma.  The noteworthy part of depression is it can be a red flag that a fighter may have already been exposed to too much career brain trauma. This latest admission adds more layers of questions as to whether Edmonton regulators met an adequate standard of care when overseeing Hague’s fatal bout.

None of the allegations or defenses have yet been proven in court.

The above-discussed pleadings read as follows: 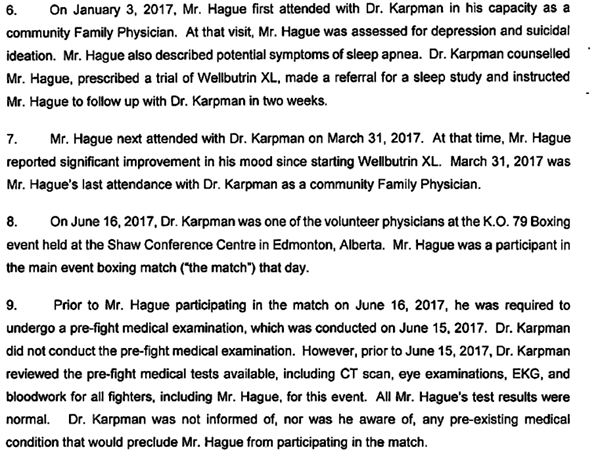 RATM rages against capitalism by charging $300/tix 8 hours ago
An owl sitting criss-cross applesauce 32 minutes ago
Trump To Take Daytona Lap With Pres Limo! MAGA! 7 hours ago
Hillary to be Bloomberg’s VP 8 hours ago
Settle an argument between wife and I 8 hours ago

? of the Day: What are your favorite nicknames in MMA?

By DontLeaveItToTheJudges
"Two fighters who should have met: Kester 'The Question' Mark and Frankie 'The Answer' Edgar."

Poll of the Day: Should MMA have 2 minute rounds like Muay Thai?

By Chaddderz
"With 2 minutes they could really push a pace especially in championship fights."

02/17/2020
There are a variety of mistakes that many beginners make that hinder their progression and the success they enjoy on the mat.
Read More